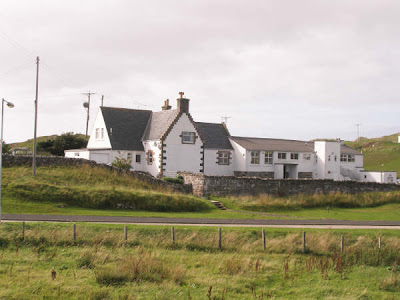 The photograph on the left shows you Scourie School, Eddrachillis, Sutherland, today. It was not always this large nor this robust.

Following is of great interest not only to those with connections to Scourie school but to general education in the county.

Sources School Log Books and the Minutes of the Old School Board; Compiled in 1972 on the Centenary of the Scotch Education Act by Catherine Allan, Head Teacher Scourie Primary School 1971 – 1988.

The present school at Scourie was built in 1866. Previous Schools were at Cardhu, beside the Free Church, and the building later used as, and still known as The Library, now an annexe to the Public Hall, which continued to be used as a Female (Sewing) School for some years after 1872.

All fees were to be paid in advance, to be collected by the teachers of each school, who would remit them with an account to the Treasurer. The fees produced from each school to be returned to the Teacher at the terms of Martinmas and Whitsunday, in addition to his salary. (From 1st January, 1875, however, fees were reduced to the uniform sum of 1/- per quarter for all ages, and later (1889) grants were given for the relief of school fees.)

The staff at this time was Alexander Cowie, Master “a man of good Attainments”, Kenneth Mackenzie Pupil Teacher, 3rd Year and Miss Jessie Pope, Sewing Mistress. In 1874 Mr Cowie’s salary was fixed at £90 per annum, plus £1 for cleaning the school, with “one fourth of the amount which he may earn or produce from the government as results”. The government grant for Scourie for that year was £31.18.4. for the Master and £17.18.4. for the P.T. Miss Jessie Pope asked for and received an increase of £1 yearly in her salary (of £5 per annum) and the Board agreed to pay this on the understanding that the Inspector reported favourably on the progress of her pupils.

Attendance was irregular and the School Board appointed Mr Evander MacIver (Chairman) and the Rev. D. Macaulay, Members, to co-operate with and assist the officer, Mr Alexander Mackay, in seeing that the children attended school regularly. They further authorized these gentlemen to go to the school at the stated periods to examine the registers, time tables and Log Books, and make the necessary entries therein.

In 1875 when the fees were reduced the Board provided fifty copy books for each school in the parish and left it to the discretion of the teachers to give them to “such as they are satisfied cannot afford to provide them otherwise”. Miss Jessie Pope resigned as the Sewing Mistress in the 1876 and Miss Betsy MacDonald was appointed. Later, in respect of the excellent report by the Inspector on the Domestic Industry and sewing class, the Board “to mark their approval of the teacher’s exertion, resolve to add £1 stg (Sterling). to Miss Betsy MacDonald’s salary, to commence at Martinmas first.” Not until 1889 was 10/- allowed annually for sewing materials.

A spring holiday was first given in 1876. The School Board “recognising that at this season of the year many parents keep their children at home to assist with field work recommend that there should be a vacation of two weeks, the same to be deducted from the autumn holidays. The school will therefore be closed for a fortnight.” Each child brought a peat to school daily for the fire but the spring and summer of 1877 were exceptionally wet and peats were scarce. In February 1878 when the Rev. D. Macaulay visited the school he found “on this, as on former occasions, the schoolroom very imperfectly heated, a number of the children barefoot and no fire in the room.” In March the School Board ordered coals (£1 per ton).

In 1881 Circular 49 from the Scotch Education Department was considered. An extract from the minutes of this meeting reads, “This Board unanimously are of the opinion that in every parish there should be at least one teacher qualified to give instruction in the Higher Subjects and that in this Parish it should be at Scourie, and the Clerk is instructed to send a copy of this minute to the Secretary of the Education Department.” At a later meeting the clerk was instructed to send a copy of the following minute to the Scotch Education Department: “With reference to the Circular from the Scotch Education Department dated 20th April last relative to the promotion of the Higher Branches of Education in Public and State-aided Schools this Board are of the opinion that in extensive Highland parishes such as Eddrachillis with a scattered population – and such are the majority of the parishes in the County of Sutherland – there is only one mode of accomplishing the object in view, which is the Establishment of one or two High Class Schools in a Central position to which pupils could be sent from various schools throughout the County who were anxious for a higher education than the Public Schools in rural parishes could provide.”

In 1884 the school received graduated writing sheets and a new map of Scotland (£1.5.3) and the Clerk of the Board was instructed to fix the desks and provide pen grooves –
Paid to –
William Macleod, Scourie, for 3 new desks £0. 8.3
John Morrison, Scourie, for 3 new seats £1. 0.4.
James Macintosh, Mason, Badcall, for repairs to school house £0.12.0
Hugh MacKenzie, Scourie, for cleaning and whitewashing school £0. 7.6

That same year Mr Cowie requested an enclosure for the house and school to protect them from horses and cattle (Ten years previously H.M.I. Mr Harper recommended that “the school premises should be enclosed by a stone wall”). The Board agreed to erect a stone wall, in length 136 yards, 4 ft. in height, the cope to be fixed with lime and to be harled inside and out and to have two small iron gates. The Clerk was instructed to receive offers for same. Two years later, the building of the wall (by George Matheson, Stoer, at 2/6 per yard) was postponed owing to additional outlay that year by the Board. Ten years later when Mr Cowie retired there was still no wall!

In 1886 the Board accepted the offer of Mr William Matheson, Road Contractor, to keep in repair the road leading to Scourie School and also the Sewing School at the sum of 15/- for that year and 12/- annually thereafter. Six years later this was raised to £1 annually. He continued this job until the Parish Council took over the upkeep of the roads in 1902. In 1886 a new set of Reading Books was ordered and later a second set – Collins Improved Readers – and also Collins History and Geography Books for all standards. New seats and desks were provided, made by Mr John Morrison, Joiner, to replace the old ones, which, according to H.M.I. were positively the worst in the Country!

Prizes were given for the first time in 1888 to the best scholars and those who had made the best attendance. Two years later the Board decided to allocate a sum of money not exceeding £5 for a school picnic as an inducement to better attendance “and those children only would be permitted to be present whose attendance throughout the year entitled the school to earn a grant on their behalf. The selection of the children to be left to the teachers.”

Irregular attendance was common. In bad weather, children from outlying districts like Badcall where at this time there was no road, could not attend. Help was needed at home with spring and harvest work and at these times attendance always suffered. But not least were epidemics of scarlet fever, ‘flu, mumps, diphtheria and measles. In 1892 “an epidemic of scarlet fever and influenza caused the school to be closed for six weeks, and was only opened with summer weather.” An extract from an Inspector’s report continues – “These facts apart the appearance made by the children was very good. The difficulty of language hardly exists at Scourie and the consequence is a more ready comprehension of the questions put by a stranger than where Gaelic is universally spoken.” Mr Cowie had forbidden pupils to speak Gaelic in the playground and as a result only the older people spoke it.

Three circulars are mentioned in this year. One from the Department as to Leaving Certificates (1892), one from the Trust for Education in the Highlands and Islands of Scotland as to Bursaries, and one about Savings Banks. A communication from the Secretary of the Edinburgh Decimal Coinage Association was laid before the Board and read.

The first evening class, in cookery, was held in the school for four weeks in1893. In 1894, Mr Cowie “in consequence of old age and infirmity, and feeling he was no longer able to do justice to his school” decided to retire. The Board, in view of his long and faithful service agreed to give him a retiring allowance of £60 a year, and to recommend the Department to give him a pension.
The Board agreed to fix the salary of the new teacher at £60 a year (plus £1 for cleaning the school) and to give him the benefit of the whole of the Government Grant that he might earn by results of examination, a house and the option of a lot of land at reasonable terms.

Mr George Sutherland Certificated from Lieurary Public School, Caithness, was appointed. The following year Miss Betsy MacDonald resigned, and Mrs Sutherland became Sewing Mistress in her place. Unfortunately “the garments at which the children had wrought during the year were all removed by the late Sewing Mistress”. Mrs Sutherland’s salary was increased from £7 to £10 per annum.

New Year (old style) was held in the district then and one or two days’ holidays were given for that about the middle of January. This practise continued up until at least 1908. On 1st February the school was closed because of the funeral of Mrs Evander MacIver, Scourie House.

Some extracts from the Log Book:
“19th July, 1895 – No school on Thursday as the scholars attending were entertained to a picnic at Loch Laxford. Attendance on Wednesday 100%.
21st May, 1897 – No school – Master engaged at planting his potatoes.
25th June, 1897 - Thursday was given as a holiday in honour of the Queen’s Diamond Jubilee. Scholars were entertained to a picnic.
22nd December, 1899 – The sewing Mistress was absent today. She has gone to Lairg to say goodbye to her brother, who has been ordered to join his regiment, The Seaforth Highlanders, in the Transvaal.
2nd February, 1900 – Thursday afternoon was observed as a holiday in honour of the relief of Ladysmith.