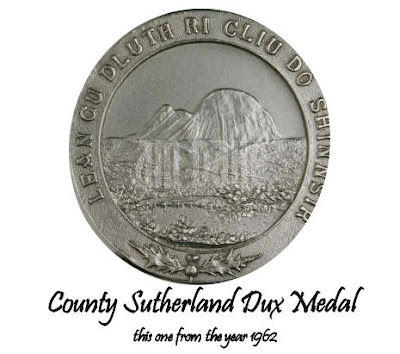 A Dux Medal is awarded in Scotland to the pupil whose academic achievements are the highest in a class, subject or school. Each year each county has a different design and motto.

Some Sutherland winners of the dux gold medal are:

A happy ceremony was performed in Dornoch Academy gymnasium yesterday, when Miss Margaret O. Will, Bishopfield, (Dornoch) received the gold dux medal of the county from Rev. William Macleod, M.A., vice-chairman of Sutherland Education Committee. There was a large and representative gathering of the general public, in addition to members of the Education Committee, staff and pupils of the Academy.

Miss Will is the fifth Dornoch student of the Academy to receive the medal, and the signal honour gained has not only brought distinction to the recipient, but also to her teachers. Each and all are to be congratulated on their achievement.

Rev. John Macaskill, Kinlochbervie, chairman of the Education Committee, presided at the presentation ceremony, and as Miss Will came forward to accept the medal from Rev. Mr Macleod there was hearty and prolonged applause, smiling faces signifying that Miss Will was a popular and worthy winner.

The Chairman, in calling upon Rev. Macleod to hand over the medal, said that Mr Macleod was well known for his interest in the youth of the community. His contribution to education in the county was inestimable.

In presenting the medal Rev. Mr Macleod said:-
“Mr Chairman, ladies and gentlemen, it is a very great pleasure to me to be asked to present the County medal to a scholar in Dornoch Academy. This ceremony is by no means an unusual one in this school, for, Sir, in the past few years we have met in this school again and again for the presentation of the medal. Last year Miss Ruby Budge of this school, won the medal, in 1934 Mr Donald Calder gained this distinction. Before then, Mr Donald Grant and Mr John Morrison brought this honour to the school. Indeed, ladies and gentlemen, a tradition is well-nigh established that the September meeting of the education Committee for the presentation of the Gold Dux Medal to the Dux of the County is held in Dornoch Academy. And, Sir, that tradition has been maintained right well this year also, for again the medal comes to a pupil of this school.

“Let me at the outset congratulate the Academy on adding another medallist to its roll of distinguished students. Ladies and gentlemen, however talented a scholar may be it requires the most competent instruction to develop the pupil’s ability, and bring out the power that is latent. To change the potential into the kinetic requires careful and skilful handling, especially in the realm of education". “The pupil who is today receiving the blue riband for scholarship in this county has been led to this distinction by her teachers and they share in her honour and success".

“But secondly let me, congratulate Miss Olive Will, the winner of the medal. It is true that recognition is due to the training that leads to distinction, but greater praise is due to the determined submission to the discipline of learning, to the diligence and to the application that pave the way to success. Olive Will has shown those qualities, and though it is dangerous to prophesy anything, I think I can venture to say that Olive’s success holds the promise of a brilliant future. I congratulate her, not only because of her achievement, but also because her success is a challenge and an inspiration to the scholars coming after her. The County medal has an inscription upon it and the motto is really in the nature of a battle-cry, “Leansa dhu ri clin do shinnsir.” You’ve all heard of the standard-bearer of the 10th Legion – how he put his heart into the faltering Romans when trying to land upon our shores, “If you do not want to see your eagle fall follow me.” That is something of the idea of the motto of the medal, and I, to-day, am glad that another pupil has raised the standard in this school to inspire others to more valiant efforts still to burnish the educational lustre of Dornoch Academy.

“And thirdly, and lastly, ladies and gentlemen, I wish to congratulate Olive’s mother, Mrs Will. Skilful instruction and native talent deserve recognition certainly, but we cannot forget that these must be seriously hindered unless scholars have the advantage of a keen home interest in their development. Who can gauge the value of the sympathetic interest of the home on the schooling of the young? Indeed, ladies and gentlemen, the contribution of the home to education is not recognised or utilised as it should be. I hope to see the day when the home and school will come much closer in the interests of education. A share of this honour to-day falls to the home, This will be a proud day in Mrs Will’s life and she deserves our congratulations on her daughter’s success.

“I have now the greatest pleasure in calling on Miss Olive Will, Dornoch, and in presenting her, in the name of the Sutherland Education Committee, the Gold Medal for 1936.”

Adapted from an article in the Northern Times October 1st, 1936.
Many thanks to Isabella Macgregor for the article.
Posted by Unknown at 20:13:00