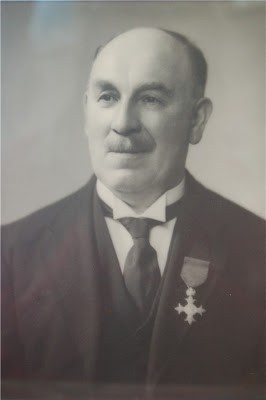 Hugh was born at Drumbeg, Assynt, in 1880, son of Robert Fraser and Dolina Graham.

He finished his schooling around 1895 at the Nicolson Institute in Stornoway, Isle of Lewis, and had been living with his uncle Jamie Graham who was said to be a piper at Stornoway Castle. In the 1901 census Hugh was living in the schoolhouse at Grimshader in the parish of Lochs, Isle of Lewis. His job was a teacher.

He was appointed Headmaster at Scourie in Sutherland on June 1st 1905. After being in that position for three years he was sent to further teacher training college in Glasgow, from 1908-1909.

He married Christina Morrison at The Castle, Inverness on 18th October 1928. His usual residence was at Scourie and his profession given as a Schoolmaster.

In December 1932 Hugh was appointed as the Registrar at Scourie. He was also a Justice of the Peace.

In 1936 he was awarded the MBE (Medal of the British Empire), the certificate signed by Queen Mary (wife of King George V) and King Edward VIII who abdicated. Photograph shows Hugh on the day of the presentation.

During the Second World War he was also Receiver of Wreck for West Sutherland.

He retired in the October of 1945 and moved from Scourie to Dornoch, buying a property Gleann Gollaidh on Castle Street. When the new school year started in August 1946 he was asked to stand in as Latin teacher until a permanent teacher could be found for that post. He agreed, but this arrangement was short lived due to his untimely death just a month later. He died at Gleann Gollaidh, Castle Street, Dornoch on 26th of September 1946. He is buried at Oldshoremore graveyard at Kinlochbervie, Eddrachillis.

He must have been quite a character at Scourie during his time as anyone I have spoken to who encountered him shudders!!! His sister Elizabeth Fraser who never married was also a teacher at Oldshore. She died in 1984.

Andy Ross, grandson of the above Hugh Fraser.
Posted by Unknown at 12:30:00