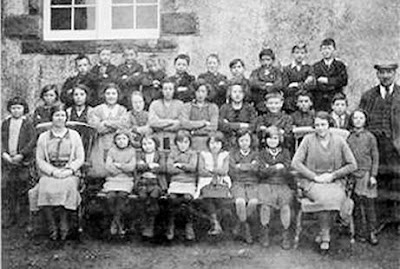 This is part two - if you missed part one click HERE.

A year after he was appointed, in 1895, Mr Sutherland wrote the School Board requesting that the school buildings be enclosed with a stone wall but his request met with no more success than Mr Cowie’s. “The Board regret that their present financial position is such that the subject can not be considered at present.” The wall was eventually built – in 1906, by Mr John MacDonald, Mason, Badcall, at 2/8 per yard.

With a roll of 50 it was no wonder that in 1898 plans were drawn up for an additional classroom (for 30 children) but it was only after repeated exhortations from the Inspectorate (as in the case of the boundary wall) that a second class room was built in 1906.

In 1900 the first mention of a Christmas Party appears in the Log Book. January 5th “On Friday the school had to be prepared for a Christmas Tree entertainment, and in consequence no school was kept.”

On January 25th, 1901 “the sad intelligence of the death of our beloved Queen” was received, and school was dismissed for the day.

In July, 1901 Mr Sutherland was given leave of absence to attend a Drawing Class at Thurso. Two local Ministers, Rev D.M. Macintyre and the Rev. Dr George Henderson were in charge of the school for the first two weeks, and a holiday was given for the third. When he returned the school was dismissed at 1 o’clock one Friday so that the joiner could fix up the Linoleum for “Free Arm Drawing”.

8th November, 1901 – Began drawing for the first time. Although a cleaner had been employed several years previously she had soon resigned. Unable to find a replacement, Mr Sutherland was obliged to resume cleaning the school, lighting fires and emptying closets, but in November, 1901, a cleaner, Miss Georgina Ross was engaged, (at a salary of £3, later increased to £3.10 out of which kindling had to be provided) and he wrote in the Log Book “I now consider myself relieved of all responsibility in the matter”.

In November 1901 Mrs Sutherland resigned and her daughter was appointed in her place. Mr Sutherland resigned in1902 and went to Halkirk School (Caithness). The Clerk of the School Board wrote to Mr Sutherland of their appreciation of his services during his eight years at Scourie and their satisfaction with the invariably high standard of efficiency which he maintained as evidenced by the very satisfactory reports of H.M.I. Mr Donald MacLeod, M.A. was appointed successor. Miss Betsy MacDonald wrote offering her services as Sewing Mistress and was re-appointed at £10 per annum. Miss Mary Morrison was appointed Temporary Monitor (at a salary of 3/- per week) with a view to becoming a Pupil Teacher after the annual Inspection.

20th June, 1902 was a holiday for King Edward’s Coronation. Tea was served and games were held in the playground. Dr Henderson opened the proceedings and Duncan MacIver supervised the games for which money prizes were given. Mrs MacDonald presented the prizes.

The School Board, in 1904, decided to raise the salary of Mr MacLeod by £3.10/- “in view of increase in the number of scholars and the satisfactory character of his work since his appointment.”

The Board considered the offers too high “and would involve an expenditure which the Board should not incur in the interests of the ratepayers, and they authorised the Clerk to write W. Spiers & Co. to ascertain the cost of a wood and iron building. Spiers offered to do the work for £142.10 (plus £17.5/- for desks). With mason work at £13.6/- the cost was £155.16/-.

The new classroom was built, but the Board would have been well advised to have spent the extra £100, for many a complaint was recorded in the Log Book for more than half a century until it ceased to be used in 1961. It has now been demolished and a new classroom is being built in its place.

There was no Public Hall at this time and functions were held in the school. Now the Board decided “to close the school against Dancing Classes, and when a concert is held, the performance should be over by midnight.”

Miss Mary Morrison’s time as a Pupil Teacher is now up and she left to continue her training having passed her King’s Scholarship Examination. Mr David MacKay, M.A. was appointed. From 1908 – 09 Mr Fraser attended the Normal College in Glasgow and Mr James B. Calder acted as Temporary Head Master.

In 1909 there was a severe influenza epidemic and the school was closed. The Log Book entry of March 8th reads, “Since our last meeting two of our number have succumbed to the virulent epidemic, namely Mary A. MacKenzie, Scourie and Adam Thomson, Badcall, and we as a school herewith record our deep regret for these sad losses.” When Mr MacKay left with a testimonial from the Board in 1909 Miss Elizabeth Fraser was appointed.

Log Book 23rd October, 1914.
“There is no C.O. employed by the Board since the present one (Duncan MacKay) left for Huntingdon last August. As he is a Lovat Scout, he will probably not be back before the war is over.” In fact he did not return from the war. Miss Fraser left to go to Oldshore as Infant Mistress in 1915 and Annabella Urquhart was appointed. Children with defective vision went to Golspie in 1912 to have their eyes tested, the parents paying for the glasses and the Board for the transport. The same year children who came from a distance were given cocoa at lunch time and by 1914 soup was given on three days a week during winter and cocoa on two. Meat was supplied when gifts of venison were used up. Miss Urquhart left in 1921.

With a roll approaching 60 Scourie now became a three-teacher school. Miss Isabella Gunn and Miss Mary B. Sutherland (from Brora) joined the staff. Miss Gunn left in 1922 and Miss J.S. Flett was appointed. Miss Betsy MacDonald also resigned that year after almost 40 years’ service. Miss H. MacKay succeeded Miss Flett in 1923. Miss Margaret Ross, M.A. joined when Miss Sutherland left in 1928. A permanent partition was erected in the junior room to make two classrooms in 1923. It was removed after the school reverted to being a two teacher.

An Inspector’s report of 1928 reads “It is highly gratifying that a day school of this modest size is able to present at the Leaving Certificate Examination year after year candidates whose proficiency in all subjects is so satisfactory. The headmaster is to be congratulated on his continued success.” And in 1932 – “The old tradition of the Scottish Parish School is admirably maintained here.”

By 1933 the roll had fallen to 35 and Miss Ross was transferred to Bonar Bridge. In 1936 Mr Fraser, in recognition of his services to Education, had the honour of M.B.E. conferred on him by the uncrowned King Edward VIII at an investiture at Buckingham Palace. He retired from Scourie in 1945 having taught there from 1st June, 1905. Mr A. MacLean who was appointed in Mr Fraser’s place, resigned in 1954.

The school was by now reduced to a junior Secondary, with Miss MacKay teaching the Homecraft Course and the Head Teacher being responsible for the rural – technical course. The homecraft room, erected in 1950 under the H.O.R.S.A. scheme was (and still is) used for the preparation and serving of school meals.

When Mr C. MacLeod, M.A., who succeeded Mr MacLean, was appointed Head Teacher to Durness in 1961 the school became a one–teacher school. In 1959 the Education Committee’s scheme for the re-organisation of Junior Secondary Education in West Sutherland had come in to effect and all secondary pupils were transferred to schools in Dornoch or Golspie, where hostel accommodation was provided, and Scourie thus became a Primary School. Miss MacKay was appointed Head Teacher, and retired in 1964 after a long and successful career.

Gaelic, which Mr Fraser had taught as a subject in his first few years at Scourie to Gaelic-speaking pupils – Miss Mary Morrison the Pupil Teacher took Gaelic as a Leaving Certificate Subject – is once again being taught. In 1971 Mr Donald J.N. MacKay was appointed visiting teacher of Gaelic to schools in the North and West. Mr David Marshall, Balnakiel has now been appointed visiting teacher of art. The roll which had been over 40 in 1942, 33 in 1952 fell to 11 by 1962 but has been increasing and now stands at 19.

Photograph above was taken at Scourie School in 1933. I do not have names of the pupils.
Posted by Unknown at 23:21:00